Funk and Thirsty Rock the Taste of the Danforth

Funk and Thirsty Rock the Taste of the Danforth

Every year thousands of food enthusiasts flock to the multicultural diversity of Toronto’s KRINOS Taste of the Danforth festival. From mouth-watering Greek cuisine like Souvlaki and Spanakopita (spinach pie) to Thai, Indian and Cuban fare, this street festival in the heart of Toronto's Greektown satisfies hungry mouths summer after summer.

Funk Roberts, not to be left out, made the Sunday afternoon jaunt up to festival to enjoy the sights, sounds and feasts. Little did I know that I would be part of this years Taste of the Danforth.

Not only was there hundreds of booths filled with good food, but there was also a huge beer garden accompanying the centre stage where bands had been showcased all weekend long. The funny thing was when I arrived to this part of the festival at 2:00PM, the stage was unoccupied. It had been raining all day and bands were hesitating to plug in their instruments. 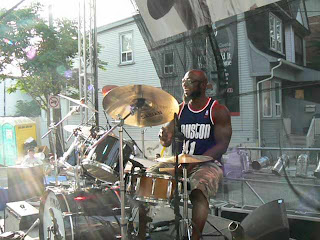 So the convener had called on Kevin Brauch, better known as the “Thirsty Traveler”

www.thirstytraveler.tv to save the day and the beer garden. He is the host of great show on the Food Network amongst other accolades.

Left to fend for himself, Thirsty called to the crowd to see if anyone had any talents. Well Funk’s drumming skills were about to be displayed. I threw my hand in the air, stated my name, rank and serial number, and fifteen minutes later, I was on stage ready for my drum solo. One problem though, no drum sticks. How was I going to enthrall the crowd on the drums with no sticks? Enter Thirsty avec wooden Spatula and a Barman’s Cocktail Muddler. That’s right, and off I went for a few minutes going SOLO without rushing the beat.

Thirsty was an instant hit himself, as he dazzled the now increasingly large crowd with his clean cut of a champagne bottle using a samurai sword and his rather gigantic cocktail concoction in a giant garbage can. 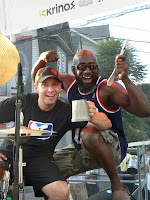 All in all, the sun came out, the band arrived to play and I was able to make a new friend in Kevin “Thirsty Traveler” Brauch. Stay tuned for the drum solo video and if you get a chance check out the new season of the Thirsty Traveler which will begin to air again in October.

Thanks for a great day Kevin
www.thirstytraveler.tv

Email ThisBlogThis!Share to TwitterShare to FacebookShare to Pinterest
Labels: Funk Roberts TV, Other, Taste of the Danforth, Thirsty Travelor

For Email Marketing you can trust

GET BLOG UPDATES TO YOUR EMAIL

YOUTH JUICE - GET HEALTHY AND SAVE MONEY

Are You In Or In The Way!

Treadmill Factory - Get All Your Fitness Needs

Yoga where you live, work & play.

Our health always seems much more valuable after we lose it.

The purpose of this blog is to share fitness tips, workouts, diet and nurition and supplement information. Consult with your physician prior to starting any exercise program.

Have a question? Get an Answer! Ask Funk and your question may be featured on the Monthly Mailbag. funkroberts@gmail.com